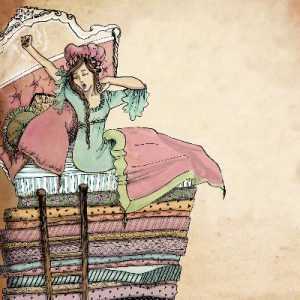 The Princess and the Pea

Not long ago I was reading to a story to my daughter about a queen who had a son, and she wanted to test a girl, to find out if she was a true princess, for in her opinion, only a true and perfect princess was good enough for her son. The test consisted of putting a pea under twenty mattresses, to see if the candidate would feel it and complain about it. The princess passed the test successfully. The next morning she complained that the pea had annoyed her and that her entire body hurt.

From this story we can learn that a true princess complains about the smallest thing, even if it’s only a little pea under twenty soft mattresses. Did the queen found the best wife for her son? Of all the possible talents a mother could have wanted in a daughter-in-law, this mother searched for and found a bride with a profound talent for complaining.

Is that the kind of wife you want for your son? If she complains about one pea under twenty mattresses, she will surely find lots of other things to complain about. Are perfectionism and a sensitive body the virtues of a true princess? At her age, if her body hurts in the morning because of a pea, what will she be like thirty years from now? Is it possible that sub-consciously, the queen was searching for someone just like herself?

Psychologically each of us thinks we are the “right” model.

Those who habitually complain are sure it is a noble trait. In their opinion, we should be thanking them for their insightful comments. However, everyone who grew up with a critical parent or is living with a critical spouse, knows and feels that a critical nature does not bring sunlight, but only dark clouds. To most of us this is common knowledge, except to the complainers themselves, who are convinced that their remarks indicate a regal sensitivity to detail.

Complainers should note that the pea in the story is an example of how insignificant things can cause great discomfort. Many things are like that and a true princess solves problems instead of complaining about them. She transforms her attentiveness into simple, appropriate action. As it says in the Book of Tao: “The Tao of the wise is to act, instead of complaining.”

Let’s consider an alternative ending to the story of the princess and the pea:

In the morning the princess gets out of bed and stretches contentedly. The queen is disappointed. When the princess doesn’t complain that her body hurts, the queen asks her if the bed was comfortable.

“I slept very well,” replied the princess. “At first something was bothering me, but I discovered that it was just a pea under the mattresses. I took it out and fell back to sleep.”

The surprised queen hugs her and says, “You are so right. You are a true princess. I see there is something I can learn from you, my future daughter-in-law.”