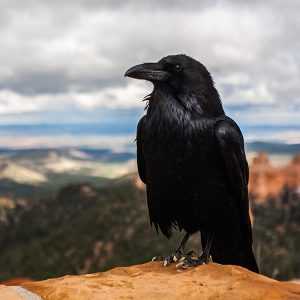 The Raven of Thoughts

The basis of the teaching on meditation and freedom from suffering is dealing with our inner raven. This is the raven of thoughts, the raven who chatters away in our mind, in our own voice, expressing himself in our own manner of speaking, and calling himself “I” as if he were me.

At the end of the day we turn out the light, get into bed, cover ourselves and close our eyes, but sleep does not come straight away. Instead, our raven alights and often prevents us from falling asleep.
He prefers to fill the silence of the night with endless tasks and reflections. Much to our disappointment he doesn’t read us poems or tell us amusing jokes. For some reason he prefers to dwell upon unpleasant thoughts, with his keen ability to provoke stress and anxiety.

Sometimes we tell him to go away and leave us in peace. “Do me a favor. I have a difficult day tomorrow. Let me sleep.” But the inner raven is a stubborn creature who doesn’t give up easily. Some of us wake up at 5:00 a.m., go to the bathroom and return to bed, but if the raven has settled in, sleep fades away.

People go to movies to take a break from this raven. If the movie was interesting, they leave contented, because for an hour and a half their raven was focused on the screen. However, if the movie is boring, enjoyment can quickly turn to torture. The moment the raven loses interest in what is happening outside, he turns and speaks to us from within our head, and if he is having a bad day, he will not let us enjoy anything.

People fill their homes with televisions, DVDs, radio, and newspapers. They surf the Internet and carry cellphones with them everywhere they go, trying to fill every spare moment with something. For when nothing is happening the raven wakes up and the nightmare begins.

It seems that the challenge for modern man is mainly “Escaping the Raven.”
There is an ancient Buddhist saying: “If you are trying to avoid your own company, how can you expect others to want to be with you?”

If you have a stressed out raven inhabiting your mind, who thinks that life is not meant to be enjoyed and doesn’t let you relax, of course it’s unpleasant for you to be with him alone. There are those who suffer from their raven so much, that even when they go to the bathroom they take a newspaper or book, so they won’t be stuck in a confined space with their raven.

It is the raven who is hiding behind the word “boredom.” Fear of boredom or aversion to it is actually fear of being left alone with your raven of thoughts.

In prison solitary confinement is considered the most severe punishment. A person is locked in a small cell and the raven is left to complete the nightmare.

Young children have not yet developed a strong raven. They can watch the same movie dozens of times and enjoy it just as much every time. Adults always need a new movie. The mature raven is impatient and he gets bored quickly. Over the years he becomes more critical, cranky, complaining, dull, and serious.

Many people would gladly get rid of their raven, but the raven never leaves voluntarily. He sticks it out to the end, and doesn’t release his grip until the moment of death.
People try to get rid of their raven, some even begging him to leave, but he insists. “I grew up with you; I have always been with you; I am your personality. Would you rather replace me with someone else’s personality? Who knows you better than I do?”

The raven is a clever bird, with beady black eyes, calling out in a rusty unpleasant voice. He instills the fear of life in us, reminding us that life is full of unexpected dangers, and that we can count on no one. Thus we are afraid to renounce him and remain without protection.
The raven creates anxiety and stress, apparently to help us survive, but his real reason is to ensure his own survival within us. He feeds us fear, imposes strict discipline, and convinces us to hide and repress our emotions.

If someone does manage to get rid of his raven, all the other ravens in the vicinity begin to harass him. Ravens are known to stick together and come to the aid of one another.

Instead of hiding away from the raven by keeping him occupied all the time,
or trying to please him, you can escape from him using meditation.
In the midst of silence is a space as slippery as soap lather,
where his grip slackens.
The truth is that you don’t have to oppose him or fear him.
All you have to do is once again become the master of your house,
and remind the raven that that he was only mean to be a servant.”
Awake in life, the truth is right in front of you.
Reality as it is fills everything, leaving no place
for the shrill cawing of the raven of thoughts.